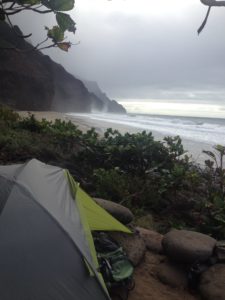 The Na Pali Coast has a rich history and culture. This lush land provides for people who live off the land. It also attracts those who are seeking isolation and reject society and wish to get away from it all. The dream and stories of Bernard Wheatley, the famous Hermit of Kalalau who gave up his belongings and career to live a simple life in the wild, is still alive. And the diverse group of short-term and long-term campers coexist in this beautiful land and continue to survive together. 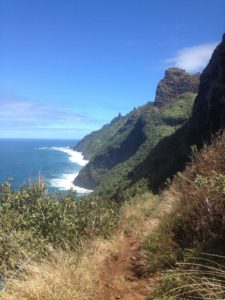 Camping is available at the Kalalau Beach and also at the Hanakoa Valley, a half way point about 6 miles along the Kalalau trail. Permits from the State of Hawaii are required to hike and camp. Permits can be secured for up to 5 nights, but it is obvious that there’s a community that stay much longer than that. 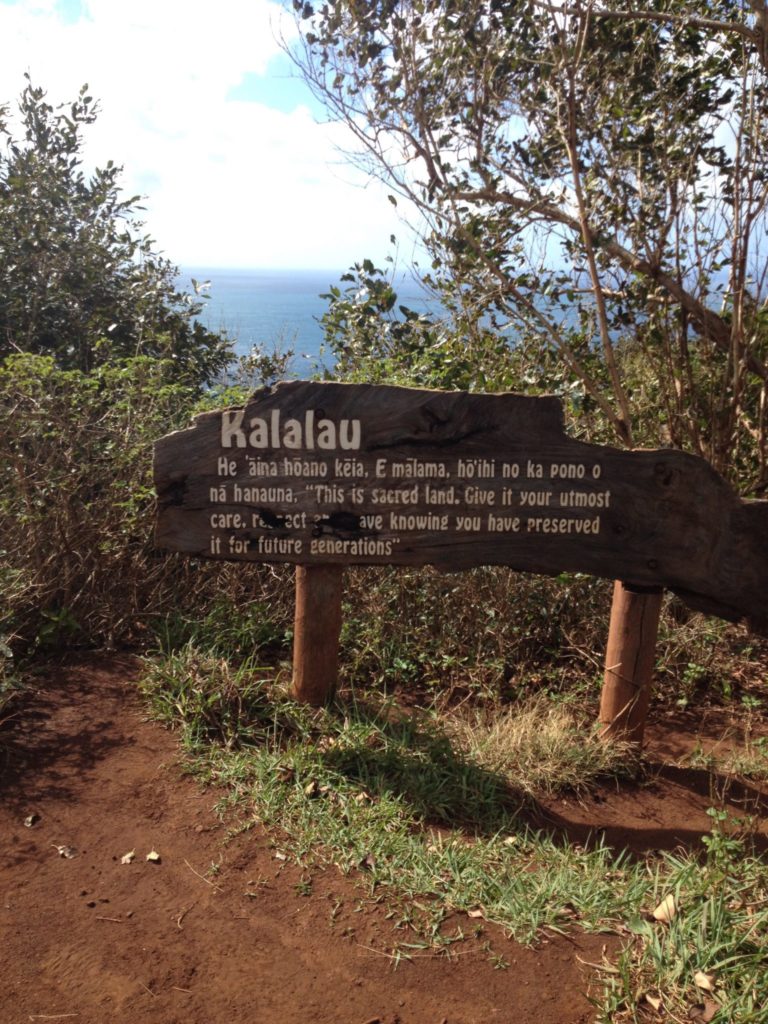 The picturesque Kalalau Beach stretches 1-mile and is surrounded by jagged sea cliffs, dramatic mountains, and the dense jungle like forest of the Kalalau Valley.

Designated camping areas are marked by signage along the tree line above the beach. It’s a large area stretching from the valley to the waterfall with a lot of camping sites available. There are also composting toilets available though not very well maintained, with broken seats, and spiders galore.  There’s also signage for areas against the cliffs that are falling rock hazards. We camped fairly close to one of these areas our first night and heard a big crash from falling rock so be cautions of this area.
Other camping sites are also welcomed but camping along the beach itself is not recommended because of the changing ocean tide. If your like us and it’s all about the camping spot, we recommend taking some time and exploring the area before pitching your tent. We ended up moving camp after our first night to get a more scenic view from a spot that opened up the second night. 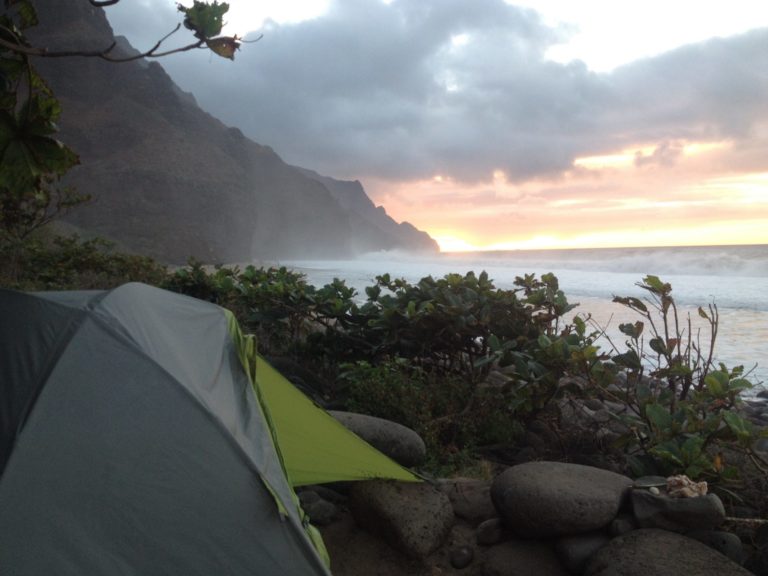 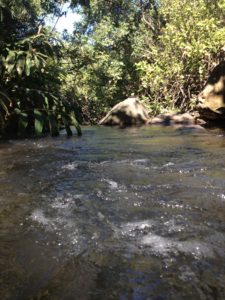 A fresh waterfall and the Kalalau Valley stream are close to the camping area on the Kalalau Beach. The waterfall is closer to the camping area than the stream, but since we were using a pump water filter, we walked to the stream to get our drinking water. We noticed a lot of other campers had gravity water filters with bags, which would work great to collect water from the waterfall. The waterfall also acts as the community shower, which is a refreshing way to rinse off. This is especially nice after that long hike in from the Kalalau Trail.

The surf at Kalalau Beach can be very strong, especially during the winter months, so swimming in the ocean at the beach is not recommended. Just watching the waves smash into the coast reminds you how dangerous and strong that ocean can be. However, if you’re looking to get your swim during the rough surf, you can always take the short walk into the valley, you will find a number of swimming holes along the , hidden lush Kalalau Stream.

Climate and Terrain at Kalalau Beach

We camped at Kalalau Beach in the middle of February. Weather was mild, with temperatures in mid 70’s F to low 80’s F with cloudy skies. We did get some rain the last night we camped and also had strong winds blowing during most of our stay. 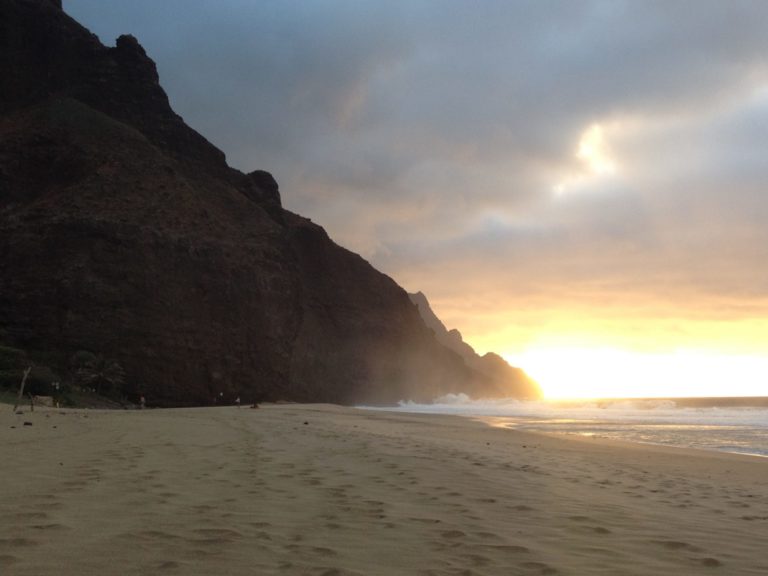 The winds also carried a lot of sand and ocean mist. Just standing in those conditions makes the salt and sand instantly stick to you.  It was nice get a break from the wind and find some coverage in the valley.

We kept our eyes open for the infamous centipedes but only saw wild goats, cockroaches and spiders. We also saw some stray cats, who were very entertaining to watch as they foraged along the beach in the evening for the small sand crabs. And the mosquitos… luckily, they aren’t fans of high winds so at the beach, they were pretty much nonexistent. However, once you make it into the valley, and especially along the river, the mosquitos will swarm- bring bug repellent if you don’t like ’em! 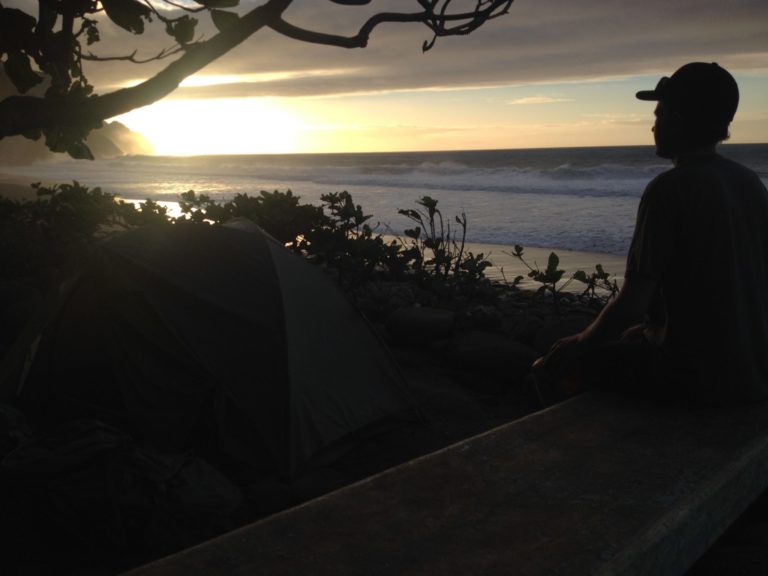 Nighttime at the Kalalau Beach were pure bliss. Gorgeous sunsets with waves crashing all night long. And with clear skies, the stars were so bright that you can see them glowing through the tent rain fly. During the night, temperature stayed warm and comfortable. We both brought sleeping bags and talked about how we should have only brought a light blanket, instead.

We packed up camp and started hiking the Kalalau Trail early the morning on our third day. We were both sad to leave and were envious of those campers who were staying longer and those who called this place home. We look forward to our next visit.